Robin Hathaway’s (1934 - 2013) writing career is the classic late-bloomer success story.  The award-winning author of the Andrew Fenimore and Jo Banks mystery series loved to share the tale of how she got published. This was not for any self-aggrandizement, but because it entertained fans and inspired budding writers of every age to pursue their passion.  At signings and seminars she often concluded by saying, “Never give up!” on a writing career. She really meant this, because, as she freely admitted, Robin almost gave up herself.

Born in Philadelphia, Robin was raised by two artist parents -- her father was the head of the art department at what is now Arcadia University (then Beaver College.) Her mother’s cousin was the mystery writer and former Mystery Writers of America president, Helen McCloy. When Robin was a child, she would sit at the top of her stairs, way past her bedtime, listening to Helen tell tales of the writing life in New York City.


Robin attended Germantown Friends School and then Smith College (BA/English), where she took classes with soon-to-be famous writers like Sylvia Plath.  She loved the literary atmosphere at Smith, where artists such as W.H. Auden would show up at the same pub as students. Robin often said she learned as much about literature by eavesdropping on poets in the next booth as she did in her classes. While at Smith, Robin wrote a lot of short stories which, as she once told an interviewer, “[They were] really depressing...I would give them to guys to read and wonder why they never came back.”

When she married Robert Alan Keisman, a New York native and physician, in 1961, writing took a back seat to other enterprises. Together, Robin and Bob founded a printing/advertising firm called Barnhouse Press.  They ran it out of their home in then-rural Darlington, Pennsylvania. (There was a printing press in the barn and one in the house.) Her first daughter, Julie, claims she was lulled to sleep by the methodical beat of a printing press in the kitchen. Robin also did freelance writing and photography for many years.

Robin and Bob also shared a love of local history.  During their second daughter, Anne’s, childhood, Robin devoted a lot of volunteer time to research and tours at Philadelphia’s historic colonial houses, such as Wyck and Stenton. Little did she know that this work would serve as the basis for her mysteries, all of which are set in the Philadelphia area.


Robin’s first love had always remained writing, however.  On her 50th birthday, her husband told her, "It's now or never." So she began. She wrote three mystery novels in three years featuring Dr. Andrew Fenimore, an old-fashioned cardiologist who still made house calls. Robin's amateur sleuth was patterned after her husband.  Many who knew Bob thought that Fenimore wasn’t just patterned after him--he was pretty much an exact replica.

For the next ten years Robin sent her mysteries out, and for ten years they bounced back with rejection letters. On her 60th birthday, Robin became very discouraged. She was ready to give up when a member of the Delaware Valley Sisters in Crime told her about a contest  -- the St. Martin's Malice Domestic Contest for Best Traditional Mystery. Deciding to give it one last try, she sent in her first Fenimore novel, The Doctor Digs a Grave, and promptly forgot all about it.

Nine months later, she received a mysterious phone call from a woman who told her, "You've won!" At first Robin thought it might be the lottery, until the woman revealed her identity as the famed editor, Ruth Cavin, of St. Martin's Press.  Ruth told her The Doctor Digs a Grave had won the contest and they wanted to publish it. Robin's first reaction was to feel elated. Then, she got a migraine headache that lasted for three days. She swore this was a release of the years-long built-up fear that she would never be published.


The success story didn’t stop there.  In 1998, The Doctor Digs a Grave won an Agatha Award for Best First Mystery. Four more books followed. In The Doctor Makes a Doll House Call each murder is preceded by a death set up in miniature in a dollhouse. The third novel, The Doctor and the Dead Man’s Chest involves pirate treasure on the Delaware Bay. In The Doctor Dines in Prague, the doctor solves a mystery in his mother's homeland, the Czech Republic. The fifth Fenimore mystery, The Doctor Rocks the Boat, is set on Philadelphia's famous Boathouse Row. Fenimore's effort to relax on the river results in murder and mayhem.

In 2003, Robin launched a new suspense series with the novel Scarecrow. This introduced Jo Banks, a young woman doctor. Jo provides medical services at motels and makes her house calls on a motorcycle in the wilds of south Jersey. Her first adventure involved smugglers that exploited immigrants using them for slave labor. Workers who didn’t produce ended up as food for buzzards. In the sequel, Satan’s Pony, a motorcycle gang invades Jo's motel. When a biker is murdered, Jo defends an innocent suspect and helps find the real murderer. In the name of research, for this novel, Robin enticed a biker to let her mount his Harley and have her picture taken for the book jacket. Next came Sleight of Hand, where an accident involving an old-fashioned printing press leads Jo into a mysterious world that that brings her to her old stomping ground: New York City.

Robin was a founding member of the Delaware Valley Chapter of the Sisters in Crime, taught for several years at The Gotham Writers' Workshop in New York City, and was a mentor with the New York chapter of the Mystery Writers of America. She also was a freelance editor and lectured on the mystery novel at schools, libraries, and other institutions. Her short stories have appeared in Ellery Queen Mystery Magazine, Arthur Hitchcock Mystery Magazine and Death Knell.

Robin got great joy out of her late-blooming career.  As she told The Philadelphia Inquirer interviewer in 2008, “What I love about what I’m doing is that it’s opened so many other doors… I always wanted to teach and now, thanks to this, I got over my stage fright.” Besides the novels she gave to readers, she gave inspiration to many writers who were just starting out.  She never forgot that she was once one of them. Her advice to struggling authors, as she told the Inquirer, was: “You can’t take it personally. You can’t think it’s because of your work. It’s a matter of taste and luck and whether you hit somebody at the right time. You have to keep on going. You can’t give up, and it’s never too late to start.”

The quotations used in this article were borrowed from “Murder Most Patient,” by Art Carey, an article on Robin Hathway that appeared in the April 5, 2008 edition of The Philadelphia Inquirer. 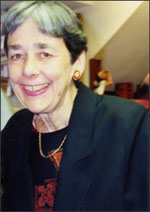